There isn’t much more off-putting than the thought of eating bugs. Of course, this isn’t something you‘d do on purpose, and consuming one of these pests might seem like an impossible task. However, sometimes you get in a hurry and don’t really pay attention to what you are shoving in your face. It doesn’t help the fact that a lot of invaders can mimic the appearance of the edibles they hide in. Simply put, eating bugs might be easier than you’d imagine.

Although some cultures consider them delicacies, they are nowhere near an acceptable food source in the American culture. They likely don’t taste as off-putting as they look, but you don’t want to make accidentally consuming these critters a normal part of your life. The real question becomes what can be done to prevent these pests from invading my food products in the first place. That’s the very thing we are here to help with!

There is a whole slew of species of pantry pests spread across the globe, but luckily there are only just a few that Texans must worry about. These would be the Indian Meal Moths, the Saw-Toothed Beetles, and the Cigarette Beetles. While there are only three species of pantry pests that Texans need to worry about, it won’t make the detection and elimination processes all that much easier. That’s because these invaders are witty, stealthy, and amongst some of the most innovative, you’ll come across.

The Indian Meal moth might only grow to be about 3/8 of an inch long, 5/8 inches if you include the wingspan, but their commonly colored bodies help them blend in with the food items they inhabit. They can appear in cream colors, yellowish-greens, or pinkish with dark brown heads. These invaders are known to crawl on ceilings and can spin cocoons in rooms other than where your food items are located.

With its six tiny projections located behind its head, this can be one intimidating hombre. The larvae of the species are yellowish-white in color and just a bit smaller than the adults but pose just as big a problem. With this species, both the adults and larvae feed on dried food products. These invaders would be classified more as scavengers and will commonly be found in flour, cereals, candies, and dried fruit.

With its name, you’ve probably already drawn the conclusion that these invaders like to feed on cigarette butts. This is true along with other cured and dried tobacco products. They are a lighter shade of brown and only grow to about 1/8 of an inch, but their humped-backed appearances and smooth wings make them one of the more interesting-looking pests. They are also fully encapsulated in body hair, giving them a more of a fuzzy appearance. Don’t let their names fool you because these invaders can also commonly be found in dried peppers, wreaths, spices, chili powder, candy, nuts, pet food, cereals, and paprika.

What Are Pantry Pests Doing On My Property?

There are no two other ways to go about it, pantry pests love dried food products. This is more than likely what has attracted them to your property. These invaders oftentimes make their way into supermarkets and other food processing facilities where they’ll have their pick of favorites. One of the things that make them a more troubling insect to deal with is they do everything on their feeding grounds. For instance, after invading a box of cereal, they literally make themselves at home, reproducing, feeding, and living right there in the same spot.

Because of this characteristic, they can invade your dried food products and turn them into a living nightmare. Not something you’ll want to be munching on. Once they’ve found their way inside your home, they’ll go from box to box repeating these processes over and over until there is an empire of these invaders lurking at your doorsteps.

Most pantry pests enter the home through cracks, gaps, and openings in the home or building’s exterior. This is where we also start our preventive measures. We’ll start by sealing the tiniest of cracks and openings in the property’s foundation, but there is only so much we can do. Pantry pest prevention is going to require cooperation from both ends and to learn more about what you can do give our Austin offices a call.

We’ll get one of our trained professionals on the property immediately, to survey, detect, and discuss viable options with you. 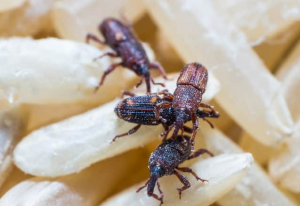